Grover Cleveland, 22nd President of the US 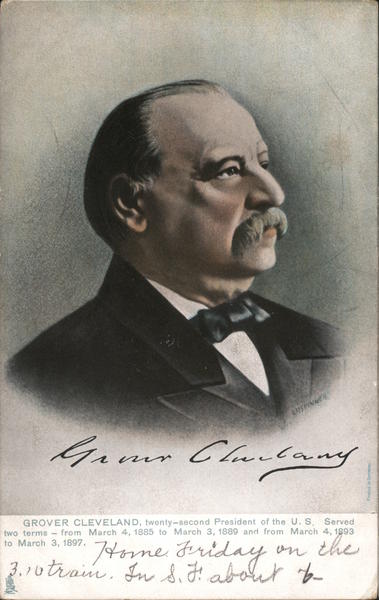 Back:
INTEIS VVV POST CARD. THE ADDRESS TO BE WRITTEN ON THIS SIDE. ANN 1190 108 FRANK ODVIVA Raphael Tuck & Sons' Post Card Series NO 2328, "Presidents of the United States." ART PUBLISHERS TO THEIR MAJESTIES THE KING AND QUEEN. Mrs. E. I. O'Day 357 Dubrrel are, San Francico. Calif GROVER CLEVELAND was born at Caldwell, N. J. on March 18, 1837. He was nominee of the Democratic party and was elected President in 1884. He was nominated for re-election, but was defeated. In 1892, after a third nomination he was re-elected President, thus becoming unique among our Chief Executives in point of enjoying two distinct intervals of service .as President. by