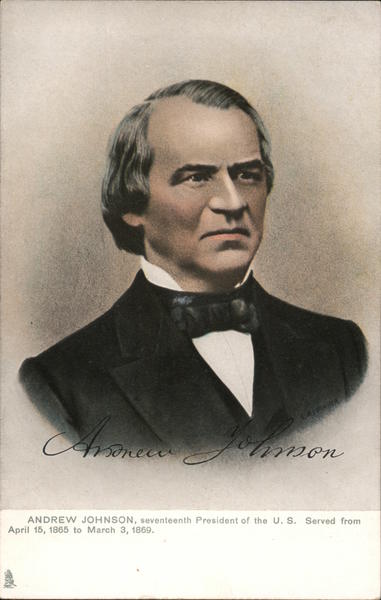 Back:
POST CARD. ARTISTIC SERIES TRADE MARK THE ADDRESS TO BE WRITTEN ON THIS SIDE. Raphael Tuck & Sons' Post Card Series No 2328, "Presidents of the United States." ART PUBLISHERS TO THEIR MAJESTIES THE KING AND QUEEN. EW JOHNSO chosen vice-Predeath of the latt for ANDREW JOHNSON was born in Raleigh, N. C. on Dec. 29, 1808, He was chosen Vice-President at Abraham Lincoln's second election, and upon the death of the latter, took up the reigns of government, serving as President for three years and eleven months. He died July 31, 1875. Printed in Germany.