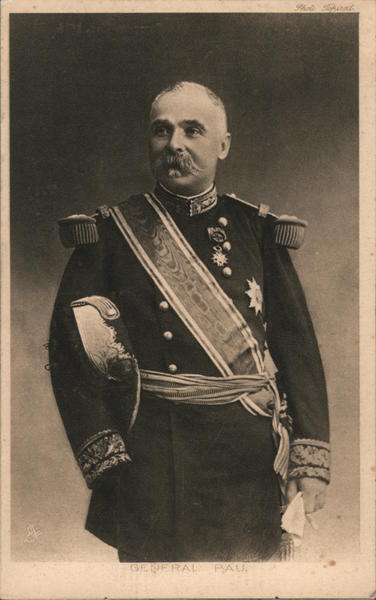 Back:
252 BADE MA The European War, 1914 Notabilities. Raphael Tuck & Sons' " Photogravure" Postcard. No. 4317. Series V. ART PUB 18HERS TO THEIR MAJEST.ES THE KING & QUEEN. CARTE POSTALE. By Appointment. General Pau, the noted French Commander, now 70 years of age. who lost an arm in the Franco-Prussian War in 1870 fighting under Bazaine at Rézonville, recovered from amputation before the surrender of Metz; escaped to Tours, and was drafted into Bourbaki's army. He refused the post of Commander-in-Chief when the great War of 1914 began, and put forward the claims of his friend, Joffre, but has since rendered conspicuous service at the front.