Gun Feud To The Last Man by Oren Arnold 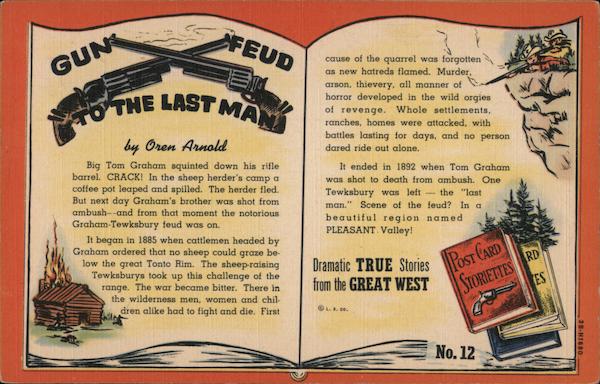 Front:
FEUD GUN TO THE LAST MAN cause of the quarrel was forgotten as new hatreds flamed. Murder, arson, thievery, all manner of horror developed in the wild orgies of revenge. Whole settlements, ranches, homes were attacked, with battles lasting for days, and no person by Oren Arnold dared ride out alone. Big Tom Graham squinted down his rifle barrel. CRACK! In the sheep herder's camp a coffee pot leaped and spilled. The herder fled. But next day Graham's brother was shot from It ended in 1892 when Tom Graham was shot to death from ambush. One Tewksbury was left the "last man." Scene of the feud? In a ambush--and from that moment the notorious beautiful region named PLEASANT Valley! Graham-Tewksbury feud was on. It began in 1885 when cattlemen headed by Graham ordered that no sheep could graze be- low the great Tonto Rim. The sheep-raising Tewksburys took up this challenge of the range. The war became bitter. There in the wilderness men, women and chil- Dramatic TRUE Stories PosT CAR RD STORIETTES ES from the GREAT WEST dren alike had to fight and die. First © L. S. co. No. 12 3B-H1680