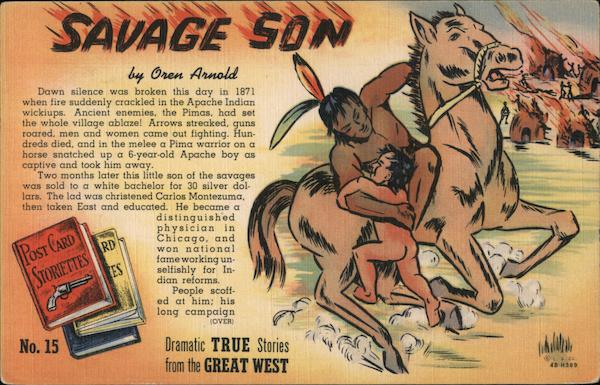 Front:
SAVAGE SON by Oren Arnold Dawn silence was broken this day in 1871 when fire suddenly crackled in the Apache Indian wickiups. Ancient enemies, the Pimas, had set the whole village ablaze! Arrows streaked, guns roared, men and women came out fighting. Hun- dreds died, and in the melee a Pima warrior on a horse snatched up a 6-year-old Apache boy as captive and took him away. Two months later this little son of the savages was sold to a white bachelor for 30 silver dol- lars. The lad was christened Carlos Montezuma, then taken East and educated. He became a RD STORIETTES ES distinguished physician in Chicago, and won national fame working un- selfishly for In- dian reforms. People scoff- ed at him; his long campaign (OVER) No. 15 Dramatic TRUE Stories from the GREAT WEST CL.S. CU. 48 н389

Back:
SAVAGE SON (Concluded) to aid the American Indians was a failure. Ill health struck him, and he came back West and died in an Apache wickiup, broken hearted and alone. However, squaws knelt at his grave in a weird wilderness chanting that means "a prediction of victory to come. Twenty years after his death the U. S. Government began a series of Indian reforms -almost exactly the same as Dr. Montezuma had planned! COPYRIGHTED BY LOLLESGARD SPECIALTY Co., TUCSON, ARIZONA