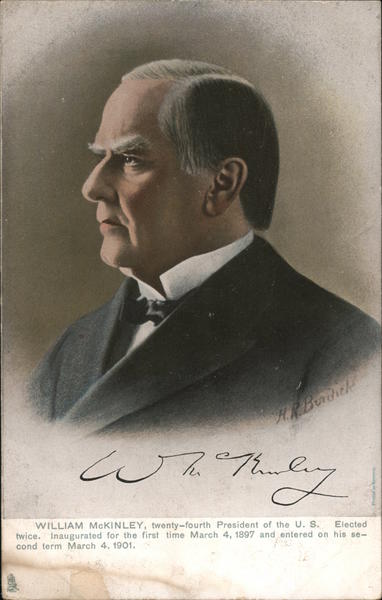 Back:
POST CARD. ARTISTIC SERIES TRADE MARK THE ADDRESS TO BE WRITTEN ON THIS SIDE. Raphael Tuck & Sons' Post Card Series Nº 2328, "Presidents of ine United States." ART PUBLISHERS TO THEIR MAJESTIES THE KING AND QUEEN. WILLIAM MCKINLEY was born at Niles, Ohio on Jan. 29, 1843, and was 53 years old when inaugurated Presi. dent. During his first term the Spanish-Ànierican War and the annexation of the Philippines were successfully concluded. Six months after his re-election he was assassinated and died Sept. 14, 1901, the third martyr President of the U. S.