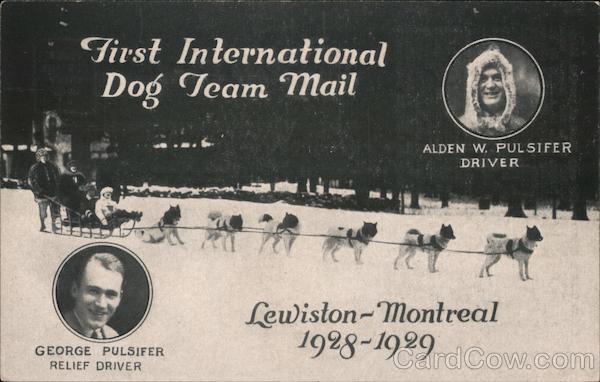 Back:
PLACE Post Card POSTAGE STAMP HERE These famous dogs are the only team of genuine black head Eskimo dogs in the world that carried the mail from Minot, Me., to Albany, N. Y., driven by Alden Pulsifer, carrying letters from the Gover- nor of Maine to the Governors of Massachusetts, New Hampshire, and New York, in 1927 of a single family. Noochusik, the lead dog, is the mother, and Ipar, nearest the sled, is the father. They were brought out of Baffinland, in the Arctic regions, by MacMillan expedition. Ipunga, Chippalla, and Ipar They are now carrying the first international dog team mail from Lewiston, Me., to Montreal and return, as the special messengers of the American Snowshoe Union, with letters from Governor Mayor Wiseman of Lewiston, Mayor Walton of Auburn, and officials of civic and fraternal organizations, under authorization from the United States Post Office Depart- ment in a special ruling by Second Assistant Postmaster General W. Irving Glover. It is the famous team This team is composed Their names are Noochusik, Oblik, Brewster, Governor-elect Gardiner,