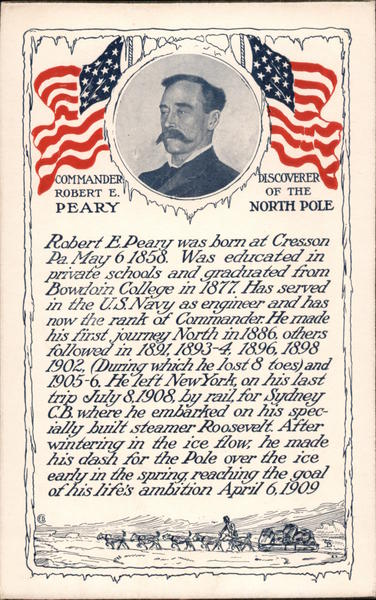 Front:
Ad COMMANDER 'DISCOVERER ROBERT E. OF THE PEARY NORTH POLE Rabert EPeary was bornat Cresson Pa.May 6 1858. Was educated in private schools and graduated from Bowdoin College in 1877 Has served in the USNavy as engineer and has now the rank of CommanderHemade his first journey North in 1886 others followed in 18Í1, 1893-4 1896, 1898 1902. (Duringwhich he lost & toes) and 1905-6. He left NewYorh, on his last trip July 81908 by rail for Sdney C.B. where he embarked on his spec- ally bilt steamer Roosevalt. After wntering in the ice flow he made his dash for the Pole over the ice early in the spring reaching the goal of his lifes ambition April 61909

Back:
PLACE STAMP HERE POST CARD UNITED STATES AND CANADA ONE CENT FOREIGN TWO CENTS MADE AND PUBLISHED BY M. T. SHEAHAN, BOSTON THIS SIDE FOR MESSAGE THIS SIDE FOR ADDRESS 12 979