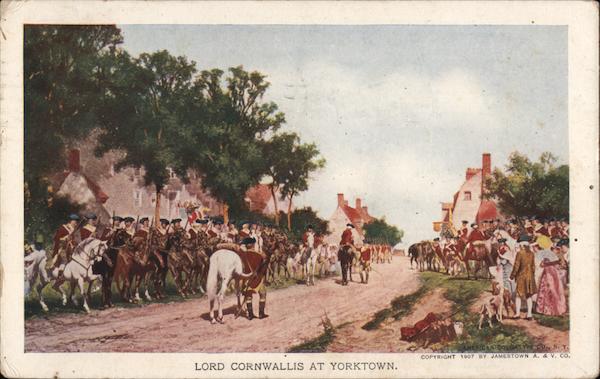 Back:
4.- #2 SERIES 1902 UNITED STATES OF 1607-JAMESTOWN EXPOSITION-1907 ARTERIGA 9 2091 OFFICIAL SOUVENIR 1907 AUG 22 2nF convalowy TION 17081 NIIN 1750 100 JANESTOWN EX.COM OFFICIAL SEAL A.M. PUBLISHED BY THE CONCESSIONAIRE, THE JAMESTOWN AMUSEMENT & VENDING CO., INC., NORFOLK VA. FOR COMMUNICATION THIS SPACE MAY BE USED ТА. 7 No room for more miss Nettie Ruhl Breckerville Lane Ceo pa No. 38. LORD CORNWALLIS AT YORKTOWN. The main army of the Continental forces being engaged in the vicinity of New York, Cornwallis plundered Vir- ginia during the summer of 1781, unopposed except by La Fayette, whose small and totally inadequate army could do but little in defense of the State. In August, Cornwallis moved his army to the York River, and, be- lieving it to be a strong position, encamped at Yorktown. La Fayette at once placed his army in front on the land side, and the French fleet coming up the river to a posi- tion near Yorktown, Cornwallis was entrapped. Wash- ington marched his army 400 miles to join La Fayette, and on his arrival it became impossible for Cornwallis to escape, and after a siege of 19 days he surrendered, his army consisting of 7,251 officers and men, 840 seamen, 240 cannons and 24 standards, to George Washington, Commander-in-Chief, and the allied forces under Comte de Rochambeau and Comte Grasse. (See cards Nos. 39, 41 and 42.) C.SI,