Orville Ewing and His Touring Menagerie 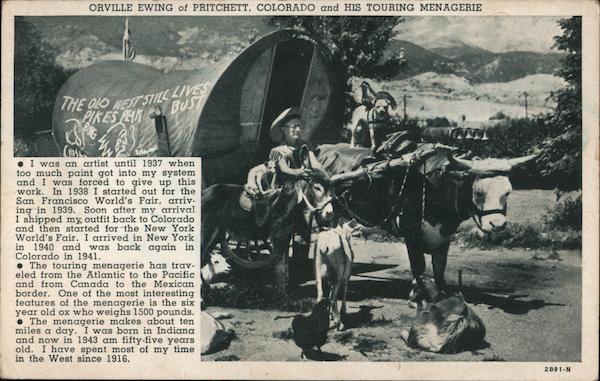 Front:
ORVILLE EWING of PRITCHETT, COLORADO and HIS TOURING MENAGERIE THE OLO WEST STILL LIVES BKES PARS BUST BONG • I was an artist until 1937 when too much paint got into my system and I was forced to give up this work. In 1938 I started out for the San Francisco World's Fair, arriv- ing in 1939. Soon after my arrival I shipped my outfit back to Colorado and then started for the New York World's Fair. I arrived in New York in 1940 and was back again in Colorado in 1941. • The touring menagerie has trav- eled from the Atlantic to the Pacific and from Canada to the Mexican border. One of the most interesting features of the menagerie is the six year old ox who weighs 1500 pounds. • The menagerie makes about ten miles a day. I was born in Indiana and now in 1943 am fifty-five years old. I have spent most of my time in the West since 1916. 2B91-N