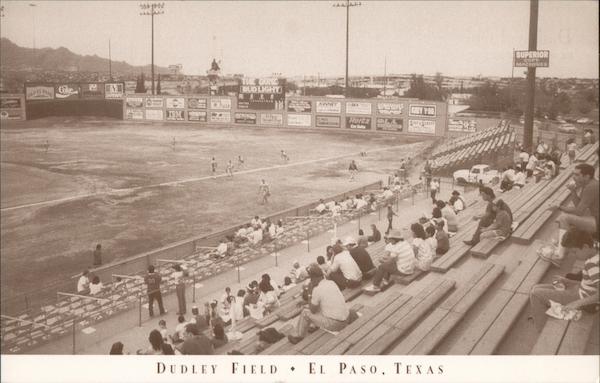 Back:
Dudley Field EL PASO, TEXAS COLORFUL SLUGFESTS. If there were ever a ballpark known for its outrageous colors, Dudley Field, former home of the Texas League's El Paso Diablos, wins first prize. One fan recalls his visit in 1986: “Garish red and yellow assault the eye at every turn and the double- tiered metallic and stone outfield wall makes odd twists and turns...the place is a bizarre amalgam of styles and modifications. It has to be seen to be believed.” At 3,700 feet elevation, slugfests were common. The main grandstand reportedly was the only one in baseball built with adobe bricks. There was a slope leading up to the CF fence. It was part of the bank of a creek that flowed on the other side of the wall. The “Dudley Dome” had character. In June 1990 the Diablos moved to Cohen Stadium, a dull place in comparison. WRITTEN & PUBLISHED BY VIC PALLOS, GLENDALE, CALIFORNIA PHOTOGRAPHED BY ROGER KOOYENGA, CHICAGO, ILLINOIS A Century of Ballparks 98-030