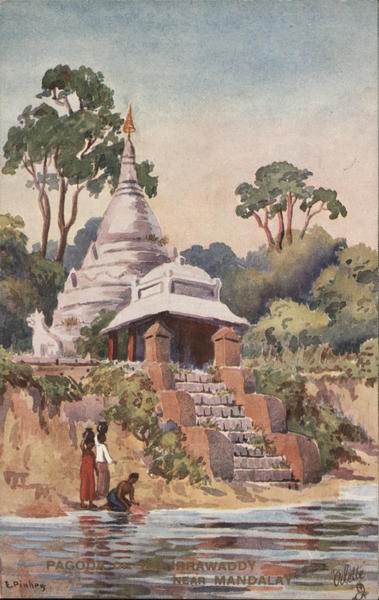 Back:
som BURMA. Series IV. Raphon Horiez 1- Postcard 7880. By Appointment. aras A Pagoda near Mandalay. A typical riverside scene. There are hundreds of such pagodas on the Irrawaddy throughout its entire length. Most of these, however, are ruins, for although the builder of a pagoda obtains “merit” by so doing, the repairer of these religious edifices obtains no reward. This explains the numbers of pagodas which exist. Anyone who is able to do so prefers to build a pagoda of his own, rather than increase the glory of some previous founder by repairing an existing shrine. WIDE WIDE - WORLD Raphael Tuck & Song "OIIETTE" ART PUBLISHERS TO THEIR MAJESTIES THE KING & QUEEN.