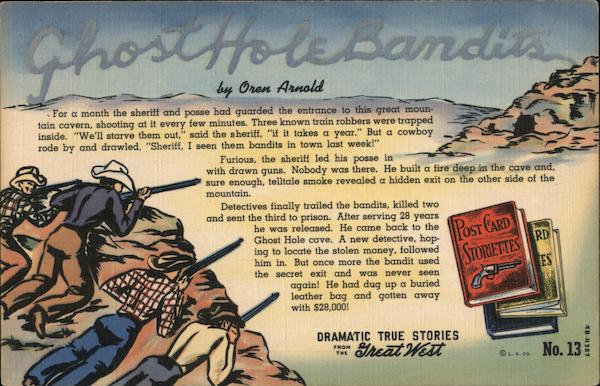 Front:
Choseffolebandia by Oren Arnold .For a month the sheriff and posse had guarded the entrance to this great moun- tain cavern, shooting at it every few minutes. Three known train robbers were trapped inside. "Well starve them out," said the sheriff, "if it takes a year." But a cowboy rode by and drawled, "Sheriff, I seen them bandits in town last week!" Furious, the sheriff led his posse in with drawn guns. Nobody was there. He built a fire deep in the cave and, sure enough, telltale smoke revealed a hidden exit on the other side of the mountain. Detectives finally trailed the bandits, killed two and sent the third to prison. After serving 28 years RD he was released. He came back to the Ghost Hole cave. A new dětective, hop- ing to locate the stolen money, followed him in. But once more the bandit used the secret exit and was never seen STORIETTES ES again! He had dug up a buried leather bag and gotten away with $28,000! DRAMATIC TRUE STORIES Theat West No. 13 © L. S. co.