The Cattle Rustler by Oren Arnold 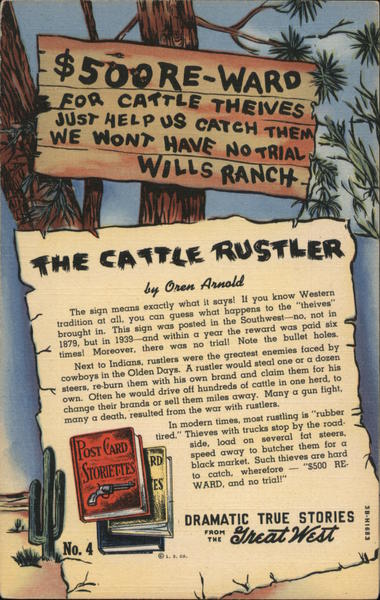 Front:
$500RE-WARD FOR CATTLE THEIVES JUST HELP US CATCH THEM WE WONT HAVE NOTRIAL WILLS RANCH THE CATTLE RUSTLER by Oren Arnold The sign means exactly what it says! If you know Western tradition at all, you can guess what happens to the "theives" brought in. This sign was posted in the Southwest-no, not in 1879, but in 1939-and within a year the reward was paid six times! Moreover, there was no trial! Note the bullet holes. Next to Indians, rustlers were the greatest enemies faced by cowboys in the Olden Days. A rustler would steal one or a dozen steers, re-burn them with his own brand and claim them for his own. Often he would drive off hundreds of cattle in one herd, to change their brands or sell them miles away. Many a gun fight, many a death, resulted from the war with rustlers. In modern times, most rustling is "rubber tired." Thieves with trucks stop by the road- side, load on several fat steers, STORIETTES RD ES speed away to butcher them for a black market. Such thieves are hard "$500 RE- to catch, wherefore WARD, and no trial!" DRAMATIC TRUE STORIES Treat West No. 4 © L. S. co. 3B-H1683