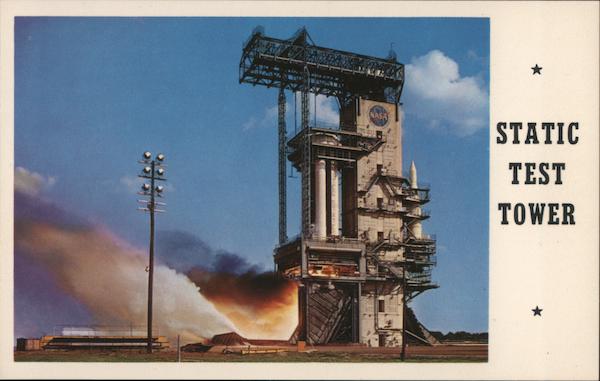 Back:
(REG. U. S. A. PAT. OFF.) STATIC FIRING TEST TOWER MARSHALL SPACE FLIGHT CENTER The Saturn booster undergoes static firing at the NASA George C. Marshall Space Flight Center, Huntsville, Alabama. The booster has been successfully static fired many times prior to the launching of the first Saturn from Cape Canaveral, Florida on October 27, 1961. The same tower has been used for Redstone and Jupiter programs. Static testing of a missile consists of locking the missile into place on the stand and firing it. The missile does not "take off“, but as it strains against the mighty grip of the great tower its roaring engine can be studied for performance characteristics as if it were ac- tually in flight. (NASA-MARSHALL PHOTO) 2 DK-375 ANDERSON NEWS COMPANY, FLORENCE, ALA. CURTEICHCOLOR® 3-D NATURAL COLOR REPRODUCTION