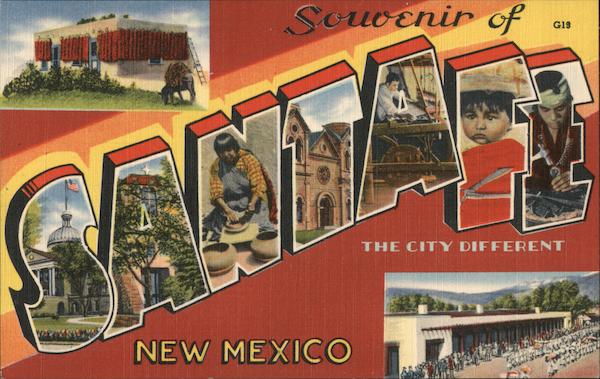 Back:
SEN-11 SANTA FE, NEW MEXICO, "THE CITY DIFFERENT", is the oldest capital in the United States, having been the i capital city under three regimes: Spanish, Mexican, and American, besides being originally an Indian Pueblo. A four have left their mark on the city and its life, which one may see every day. The Spanish language is heard on the streets quite as much as English, and the Indians selling their handicraft are common place sights. DOST CARD GARR ADVERTISING SERVICE BOX 646. ALBUQUERQUE N. M. DISTRIBUTED BY ALFRED MC “TICHNOR QUALITY VIEWS” REG. U. S. PAT. OFF. MADE ONLY BY TICHNOR BROS., INC., BOSTON, MASS, 74847