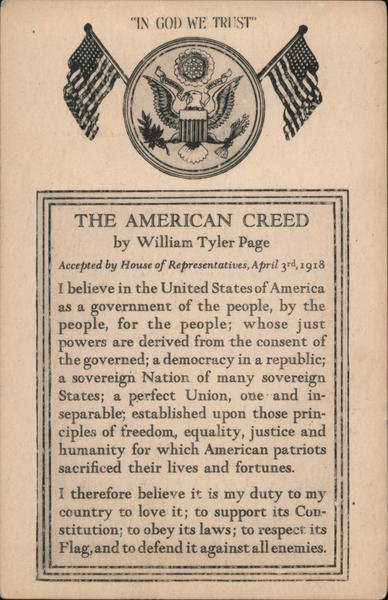 Front:
"IN GOD WE TRUST" GPAUR UNUM THE AMERICAN CREED by William Tyler Page Accepted by House of Representatives, April 3rd, 1918 I believe in the United States of America as a government of the people, by the people, for the people; whose just powers are derived from the consent of the governed; a democracy in a republic; a sovereign Nation of many sovereign States; a perfect Union, one and in- separable; established upon those prin- ciples of freedom, equality, justice and humanity for which American patriots sacrificed their lives and fortunes. I therefore believe it is my duty to my country to love it; to support its Con- stitution; to obey its laws; to respect its Flag, and to defend it against all enemies. immin

Back:
Brooklyn, N. Y. P. 2000 I would never sacrifice my right to say, I am a loyal citizen of the U. S. A. My Country 'Tis of Thee I sing Sweet Land of Liberty. Founded 1887 Educational Series: "Americanism" Published by The Albertype Co. THE FINEST AMERICAN MADE VIEW POST CARDS-THE ALBERTYPE CO., BROOKLYN, N. Y.