Repeal DOMA the deny others marriage act. Equal rights for all. 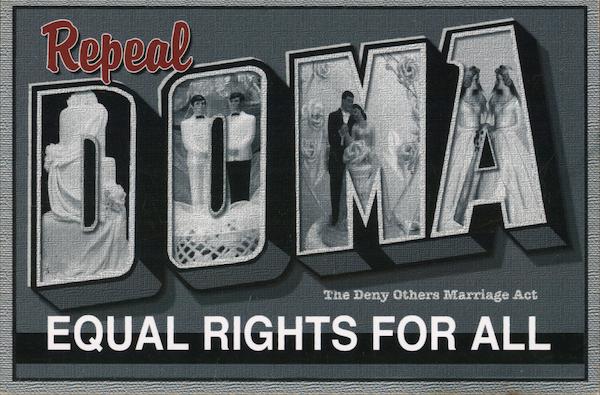 Front:
Repeal The Deny Others Marriage Act EQUAL RIGHTS FOR ALL

Back:
Repeal ACNA ae Deny others warriage Bes EQUAL RIGHTS FOR ALL The Defense of Marriage Act (DOMA) defines marriage as a legal union between one man and one woman for purposes of all federal laws, and provides that states need not recognize a marriage from another state if it is between persons of the same sex. 37 states have their own Defense of Marriage Acts, while 2 more states have strong language that defines marriage as one man and one woman. There are 30 states that have constitutional amendments protecting traditional marriage, including the 3 states (Arizona, California and Florida) that passed constitutional amendments in November 2008. REPEAL DOMA PC BY LARRY FULTON 2010 WWW.POSTCARDJOURNEY.COM L.FULTON'lo LIMITED EDITION OF 100