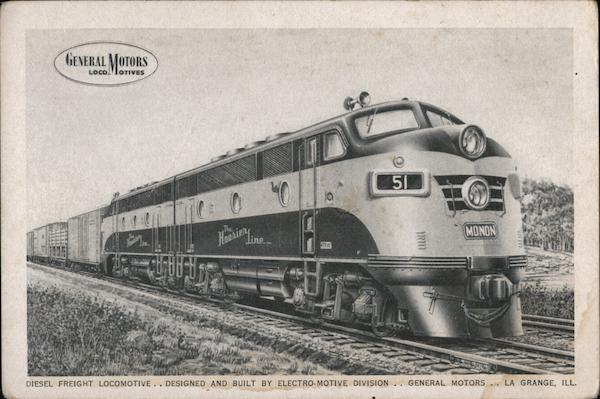 Back:
Diesel Power FOR THE MONON THE new General Motors freight loco- motives in service on the Chicago, Indianapolis & Louisville Railway are capable of moving heavier tonnage over greater distances in quicker time than any other type of locomotive in their horsepower range. This tonnage moving ability is due not alone to high tractive effort, but also to other inherent advantages of the General Motors locomotive design, such as ability to take curves faster due to a low center of gravity, omission of frequent water stops and ability to pull a long, heavy freight train 500 miles without a stop for fuel. She Each locomotive is made up of two or three units, totalling 3000 or 4500 horse- power. The units are con- trolled from the engineer's position located in the cab, which is high in the streamlined nose. - In each unit there is a two-cycle, 1500 horsepower, sixteen cylinder General Motors Diesel engine which drives a gen- erator. The generator supplies electric power to the traction motors which are mounted in the trucks and geared directly to the axles of the wheel assemblies. Operation of traction motors, gener- ators and Diesel engines is coordinated by an ingenious set of controls, some automatic, some at the command of the engineer. With the engi- neer's pull at the throttle, the automatic controls make the Diesel engine run at the speed necessary to turn the generator fast enough to pro- duce the electricity required by the traction motors to do the pulling the throttle has “told” them to do. Throttle 20 Generator Diesel Engine Rails Traction Motors and Wheels