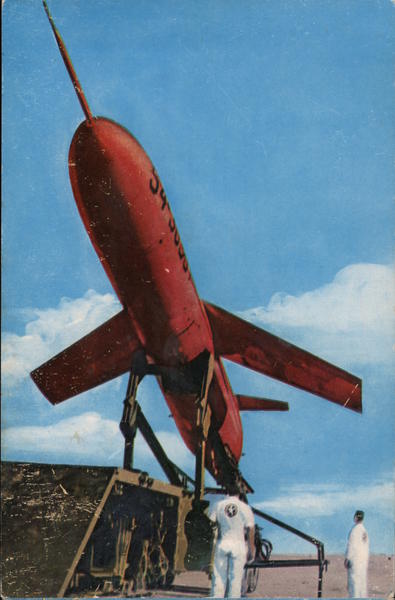 DEFENDERS OF AMERICA* U.S. AIR FORCE TM-61 MATADOR The TM-61 MATADOR, manufactured by Martin, is a tactical guided missile. It is 39.6 ft. long and has a span of 27.9 ft. It is launched from a roadable, mobile launcher with a rocket-assist take off. It flies over 650 miles per hour and is controlled electronically in flight. The Air Force presently has several MATADOR Squadrons deployed in Europe. This is No. 10 of a series of twenty-four cards, each illustrating and describing a different weapon or piece of equipment in the NABISCO Shredded Wheat "Defenders of America” series. Each of these cards is a full detailed reproduction of an official United States Army, Navy and Air Force or Marine photograph. One of these official photograph reproductions is packed in each package of Nabisco Shredded Wheat. Get the entire set by eating Nabisco Shredded Wheat regularly and trading with your friends. NATIONAL BISCUIT COMPANY * NEW YORK 22, N.Y. *TRADE MARK U.S. AIR FORCE PHOTOGRAPH