Greetings from the Indian Capital 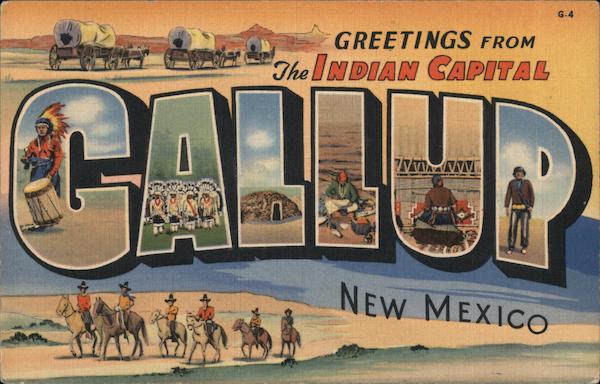 Back:
#20 20 7A-H1723 DISTRIBUTED BY J. R. WILLIS, BOX 665, ALBUQUERQUE, N. M GALLUP, NEW MEXICO Often called the “Last Frontier”, is on the border of the great Navajo Indian Reservation, which comprises 1,500,000 acres of land and 48,000 souls, ever increasing. Navajos are famed for their ¿ blankets and hand-made silver jewelry set with turquoise. More articles of Indian origin are marketed from Gallup than any other city in America. It is also distinguished as the "Indian Capital”, many tribes of Indians from the four cardinal points 5 being neighbors and visitors, especially to the Inter- Tribal Indian Ceremonial, which is held annually during the last week of August. The Hopi, Zuni, Acoma, Laguna, Apache, (3 tribes) Utes, Sioux and many tribes of the Rio Grande take part in this colorful event. Gallup is near the Continental Divide, in the beautiful Red Mesa country, with its Ice Caves, Inscription Rock and scenic grandeur to attract artists and tourists “off the beaten path". C.T. ART-COLORTONE" REG.U.S. PAT. OFF. MADE ONLY BY CURT TEICH & CO., INC., CHICAGO 1194 La Bishope Oceber.