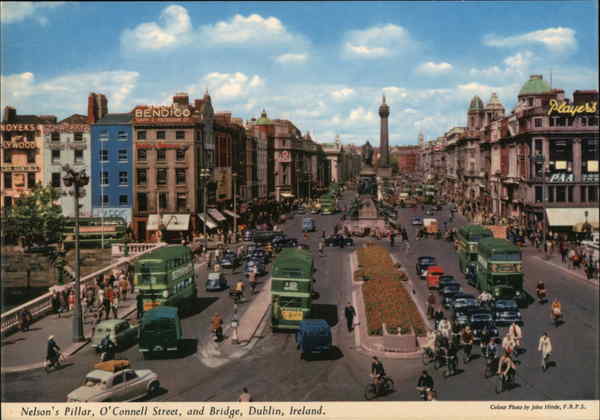 Back:
JOHN HINDE ORIGINAL O'CONNELL STREET, DUBLIN -The city's main thoroughfare, and one of the widest streets in the world. It crosses the River Liffey at O'Connell Bridge. A statue of Daniel O'Connell, the 19th century Irish statesman, stands in the centre of the street, and Nelson Pillar (134 feet) rises directly behind it. Dublin (population 500,000), capital of Ireland, was founded by Viking pirates over a thousand years ago, at the foot of the Wicklow Mountains, facing Dublin Bay. It is famous for its magnificent Georgian (18th century) architecture. No. 2/7 Lithographed and Published by John Hinde at Dalkey, Co. Dublin, Eire.