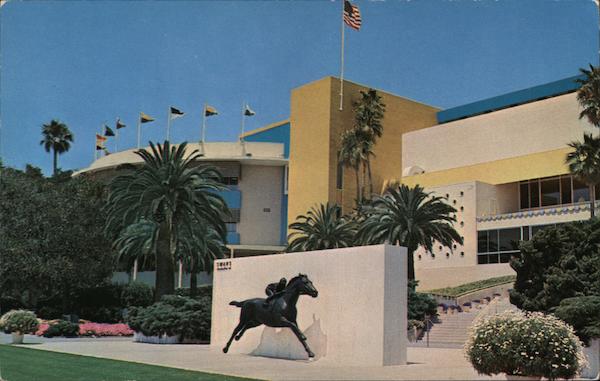 Hollywood Park INGLEWOOD, CALIF. PLACE STAMP HERE At the beautifully landscaped entrance of Hollywood Park's Clubhouse stands Albert Stewart's famous statue of Swaps, with Jockey Bill Shoemaker up. Winner of the Kentucky Derby in 1955, the California- bred Swaps was king of the racing realm in 1956 when, at Hollywood Park in the most spectacular series of record-breaking performances in thoroughbred his- tory, he set three new world marks and tied a fourth. Swaps was bred and raced by Rex C. Ellsworth, trained by Meshach (Mish) Tenney and ridden in most of his races by Shoemaker. LITHOGRAPHED BY HOMER H. BOELTER LITHOGRAPHY • HOLLYWOOD, CALIFORNIA