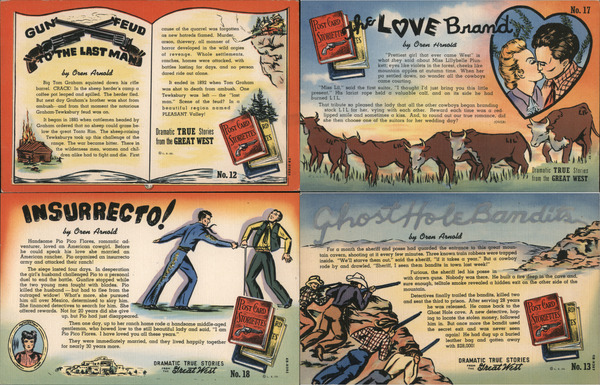 Front:
FEUD GUN THE LASTM ST MAN1 cause of the quarrel was forgotten as new hatreds flamed. Murder, arson, thievery, all manner of horror developed in the wild orgies of revenge. Whole settlements, ranches, homes were attacked, with battles lasting for days, and no person dared ride out alone. It ended in 1892 when Tom Graham was shot to death from ambush. One Tewksbury was left - the "last man." Scene of the feud? In a beautiful region named PLEASANT. Valley! en -O11 MO by Oren Arnold Big Tom Graham squinted down his rifle barrel. CRACK! In the sheep herder's camp a coffee pot leaped and spilled. The herder fled. But next day Graham's brother was shot from ambush--and from that moment the notorious Graham-Tewksbury feud was on. It began in 1885 when cattlemen headed by Graham ordered that no sheep could graze be- low the great Tonto Rim. The sheep-raising Tewksburys took up this challenge of the range. The war became bitter. There in the wilderness men, women and chil- dren alike had to fight and die. First 20 Dramatic TRUE Stories from the GREAT WEST POST CARD STORIETTES © L. S. co. 3B-H1680 No. 12 No. 17 THE LOVE Brand & PosT CARD STORIETTO by Oren Hrnold "Prettiest girl that ever came West" is what they said about Miss Lillybelle Plun- kett; eyes like violets in the forest, cheeks like mountain apples at autumn time. When her pa settled down, no wonder all the cowboys came courting. "Miss Lil," said the first suitor, "I thought I'd just bring you this little present." His lariat rope held a valuable calf, and on its side he had burned LIL. That tribute so pleased the lady that all the other cowboys began branding stock LIL for her, vying with each other. Reward each time was a red- lipped smile and sometimes a kiss. And, to round out our true romance, did she then choose one of the suitors for her wedding day? (OVER) 4B.H391 1. Dramatic TRUE Stories ") from the GREAT WEST CL. s. co. INSURRECTO/ by Oren Arnold Handsome Pio Pico Flores, romantic ad- venturer, loved an American cowgirl. Before he could speak his love she married an American rancher. Pio organized an insurrecto army and attacked their ranch! The siege lasted four days. In desperation the girl's husband challenged Pio to a personal duel to end the battle. Gunfire stopped while the two young men fought with blades. Pio killed the husband - but had to flee from the outraged widow! What's more, she pursued him all over Mexico, determined to slay him. She financed detectives to search for him. She offered rewards. Not for 20 years did she give up, but Pio had just disappeared. Then one day, up to her ranch home rode a handsome middle-aged gentleman, who bowed low to the still beautiful lady and said, "I am Pio Pico Flores. I have loved you all these years.' They were immediately married, and they lived happily together for nearly 30 years more. POST CARD (STORIETTES DRAMATIC TRUE STORIES From Treat Wed 4B-H392 FROM THE No. 18 © L. s. co. hos HOLE bandi by Oren Arnold For a month the sheriff and posse had guarded the entrance to this great moun- tain cavern, shooting at it every few minutes. Three known train robbers were trapped inside. "We'll starve them out," said the sheriff, "if it takes a year." But a cowboy rode by and drawled, "Sheriff, I seen them bandits in town last week!" Furious, the sheriff led his posse in with drawn guns. Nobody was there. He built a fire deep in the cave and, sure enough, telltale smoke revealed a hidden exit on the other side of the mountain. Detectives finally trailed the bandits, killed two and sent the third to prison. After serving 28 years he was released. He came back to the Ghost Hole cave. A new detective, hop- ing to locate the stolen money, followed him in. But once more the bandit used the secret exit and was never seen again! He had dug up a buried leather bag and gotten away with $28,000! POST CARD STORIETTES DRAMATIC TRUE STORIES For treat WEN FROM THE 4B.H387 © L. S.Co. No. 13