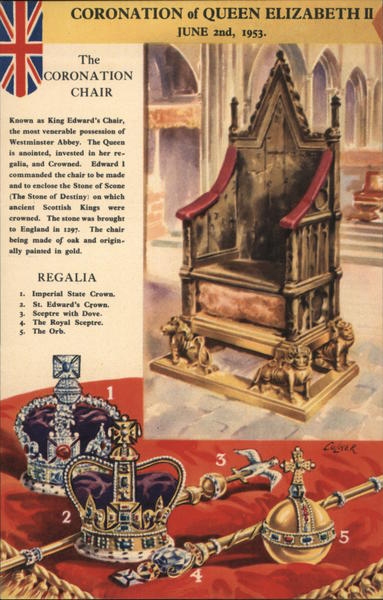 Front:
CORONATION of QUEEN ELIZABETH II JUNE 2nd, 1953 The CORONATION CHAIR Known as King Edward's Chair, the most venerable possession of Westminster Abbey. The Queen is anointed, invested in her re- galia, and Crowned. Edward 1 commanded the chair to be made and to enclose the Stone of Scone (The Stone of Destiny) on which ancient Scottish Kings were crowned. The stone was brought to England in 1297. The chair being made of oak and origin ally painted in gold. REGALIA 1. Imperial State Crown. 2. St. Edward's Crown. 3. Sceptre with Dove. 4 The Royal Sceptre. 5. The Orb. CubveER 3 2 5

Back:
POST CARD For Correspondence The address only to be written here CORONATION SOUVENIR JUNE 2 1953