Take Me Back to Old Montana, Cowgirl 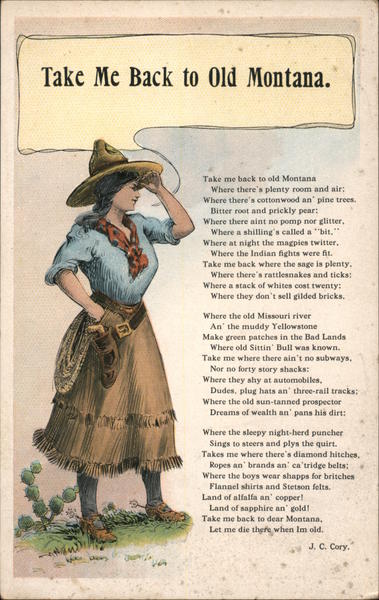 Front:
Take Me Back to Old Montana. Take me back to old Montana Where there's plenty room and air; Where there's cottonwood an' pine trees. Bitter root and prickly pear: Where there aint no pomp nor glitter, Where a shilling's called a bit, Where at night the magpies twitter, Where the Indian fights were fit. Take me back where the sage is plenty, Where there's rattlesnakes and ticks: Where a stack of whites cost twenty: Where they don't sell gilded bricks. Where the old Missouri river An' the muddy Yellowstone Make green patches in the Bad Lands Where old Sittin' Bull was known. Take me where there ain't no subways, Nor no forty story shacks: Where they shy at automobiles, Dudes, plug hats an' three-rail tracks; Where the old sun-tanned prospector Dreams of wealth an' pans his dirt: Where the sleepy night-herd puncher Sings to steers and plys the quirt. Takes me where there's diamond hitches, Ropes an' brands an' ca'tridge belts; Where the boys wear shapps for britches Flannel shirts and Stetson felts. Land of alfalfa an' copper! Land of sapphire an' gold! Take me back to dear Montana, Let me die there when Im old. J. C. Cory.