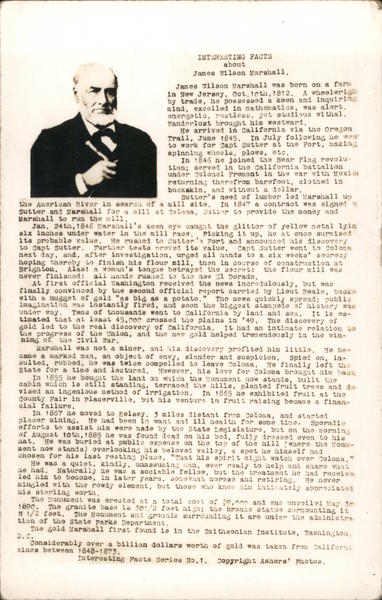 Front:
INTERESTING FACTS about James wilson Marshall. James Wilson Marshall was born on a far in New Jersey, oct.1oth, 1812. A wheelwrigh by trade, he possessed a keen and inquirina mind, excelled in mathematics, was alert energetic, restless, yet studious withal Wanderlust brought him westward. He arrived in California via the Oregon Trail, June 1845. In July following he wen' to work for Capt Sutter at the Fort, makins spinning wheels, plows, etc In 1846 he joined the Bear Flag revolu- tion; served in the Cali fornia bat talion under colonel Fremont in the war with Mexi c returning the refrom barefoot, clothed in buckskin, and without a dollar. Sutter s need of lumber led Marshall up In 1847 a contract was signed b Sutter and Marshall for a mill at oloma, Sutter to provide the money and the American River in search of a mill site. Marshall to run the 111 Jan. 24th,848 Marshall's keen eye caught the glittor of yellow metal lyin Picking it up, he at once surmised its probable value. He rusned to sutter's Fort and announced his discovery Capt Sutter went to Coloma next day, and, after investigation, urged all hands to a six weeks secrecy hoping thereby to finish his flour mill, then in course of construction at Brighton. Alas! a woman's tongue be trayei the secret: the flour mill was six inches under water in the mill race. to Capt Sutter Further tests proved its value never fini shod: all hands rushei to tho new l Dorado. At first offlc lal Washington received the news incredulously , but was finally convinced by the second official report carried by Lieut Beale, backe with a nugget of gold "as big as a potato." The news qui ckly spread; public imagination was instantly fired, and soon the biggest stanpede of history was Tens of thou sands went to California by land and sea. It is es timated that at leaat 45,000 crossed the plains in 49. The discovery of gold led to the real discovery of California. It had an intimate relation to the progress of the Union, and the new gold helped trem endou sly in the win- under way. ning of the civil War. Marshall was not a miner, and his discovery profited hin little. He be- came a marked man, an object of envy, slander and suspicion. Spi ed on, in- sulted, robbed, he was twice compelled to leave Coloma. He finally left the However, his love for Coloma brought him back In 1855 ne bought the land on which the Monument now stands, built the cabin which is still standing, terraced the hills, planted fruit trees and de vised an ingenious method of irrigation. In 1865 he exhibited fruit at the County Fair in placerville, but his venture in fruit rai sing became a finan- State for a time and lectured cial failure In 1867 he moved to Kel sey, 3 miles distant from Coloma, and started placer aining. He had been in want ani ill health for some tine. Sporadic efforts to assist nin were made by the State Legislature, but on the morning of August 1oth,1885 he was found dead on his bed, fully dressed even to his He was buried at public expense on the top of the hill (where the Monu- nat ment now stands) overlooking his belovei valley, a spot he hims elf had chosen for his last resting place, "That hls spirit might watch over Coloma." He was a quiet, kindly, unassuming man, ever ready to help and share what Naturally he was a sociable fellow, but the treatment he had receiver ne had led him to become, in later years, somewhat morose and retiring. He never mingled wi th the rowdy element, but those wno knew hin intimately appreciated his sterling worth The Monument was erected at a to tal cost of 9,000 and was unveiled May 3r 1890. The granite base is 301/2 feet high; the bronze statue aurm ounting it The Monument and grounds surrounding it are under the aiministra 11 1/2 feet tion of the State Parks Department. The gold Marshall first found is in the Smithsonian Institute, Washing ton, D.C. Considerably over a billion dollars worth of gold was taken from Californi nines betwe en 1848-1873 Interesting Facts Series No.1. Copyright Ashers' Photos.