United We Stand for the Liberty of All Mankind 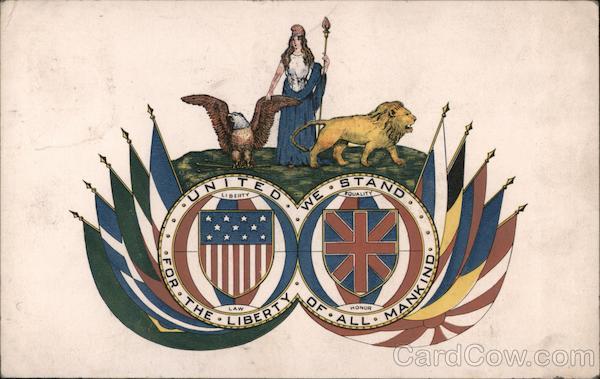 Back:
U.S.POSTAGE tao willacon de better hope you Pleased to her Den Lilliamson you are getting AGAM ODNO ADDRESO ONLY RESPONDENCE ADDRESS ONLY On the reverse side the two circles represent the Eastern and Western Hemispheres partly covered by the Norman Shield protected by "O the Union Jack on the Eastern Hemisphere, and the Stars and Stripes on the Western. Around the axis on which the world turns at the poles are the principles for which we stand “LIBERTY, EQUALITY, LAW, HON- OR.” with the motto, “UNITED WE STAND FOR THE LIBERTY OF ALL MANKIND,” encircling the Globe. Above, France is repre- sented as the Goddess of Liberty holding the torch of enlightenment, protected by the British Lion and the American Eagle. Around the hemispheres are draped the flags of the Allies. $ToCare 17918 - Miss Lillian Inasben 6616 oft Baurence ave COPYRIGHT APPLIED FOR