Maintain the Flag on the Pacific 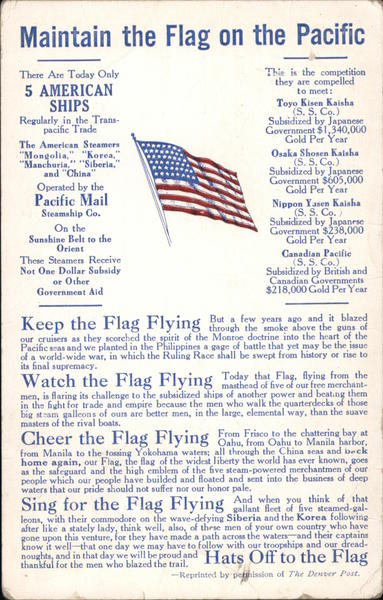 Front:
Maintain the Flag on the Pacific Tans * * * * * * * * * * * * * * *** * * * * * * ** * There Are Today Only 5 AMERICAN SHIPS Regularly in the Trans- pacific Trade The American Steamers “Mongolia,” “Korea,” "Manchuria,” ”Siberia, and "China Operated by the Pacific Mail Steamship Co. On the Sunshine Belt to the Orient These Steamers Receive Not One Dollar Subsidy or Other Government Aid This is the competition they are compelled to meet : Toyo Kisen Kaisha (S. S. Co.) Subsidized by Japanese Government $1,340,000 Gold Per Year Osaka Shosen Kaisha (S. S. Co.) Subsidized by Japanese Government $605,000 . Gold Per Year Nippon Yusen Kaisha (S. S. Co.) Subsidized by Japanese Government $238,000 Gold Per Year Canadian Pacific Subsidized by British and Canadian Governments $218,000 Gold Per Year Cans. S. British ents Keep the Flag Flying But a few years ago and it blazed through the smoke above the guns of our cruisers as they scorched the spirit of the Monroe doctrine into the heart of the Pacific seas and we planted in the Philippines a gage of battle that yet may be the issue of a world-wide war, in which the Ruling Race shall be swept from history or rise to its final supremacy. Watch the Flag Flying Today that Flaş, flying from the masthead of five of our free merchant- men, is flaring its challenge to the subsidized ships of another power and beating them in the fight for trade and empire because the men who walk the quarterdecks of those big steam galleons of ours are better men, in the large, elemental way, than the suave masters of the rival boats. From Frisco to the chattering bay at Oahu, from Oahu to Manila harbor, from Manila to the tossing Yokohama waters; all through the China seas and back home again, our Flag, the flag of the widest liberty the world has ever known, goes as the safeguard and the high emblem of the five steam-powered merchantmen of our people which our people have builded and floated and sent into the business of deep waters that our pride should not suffer nor our honor pale. Sing for the Flag Flying And when you think of that gallant fleet of five steamed-gal- leons, with their commodore on the wave-defying Siberia and the Korea following after like a stately lady, think well, also, of these men of your own country who have gone upon this venture, for they have made a path across the waters--and their captains know it well-that one day we may have to follow with our troopships and our dread- noughts, and in that day we will be proud and I thankful for the men who blazed the trail. - Reprinted by permission of The Denver Post.