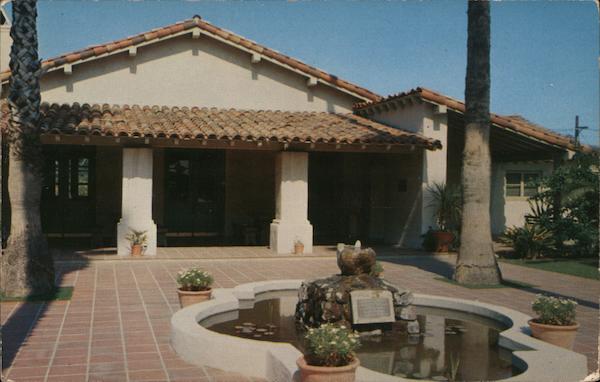 PLACE Rabet Ford STAMP HERE FABULOUS SAN FERNANDO VALLEY Campo de Cahuenga – Site of the most important historic landmark West of the Mississippi. Here is where the final act of the dramatic Conquest of California was staged and it marked the completion of the development of the United States westward. It was here, that these events took place which meant that the United States was to possess not only California but also the territory which now is Nevada, Utah, Arizona and parts of New Mexico, Colorado and Wyoming. Early in January 1847 the Treaty of Cahuenga was signed by General Andres Pico, the last California governor under Mexican rule, and Lieutenant Colonel John C. Fremont in command of the California Volunteer Battalions. That treaty signified the abandon- ment by Mexico of all the vast western territory referred to above. Color Photography by Max Mahan POST CARD Address Published and Distributed by Columbia H-1728 Columbia Wholesale Supply, 7609 Santa Monica Blvd., Hollywood 46, Calif. $1956