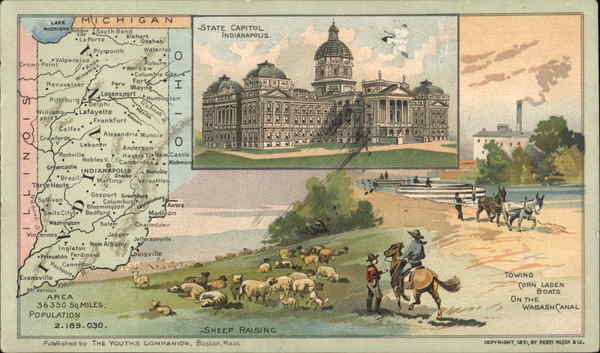 Back:
Sharh Contra 22 ben Derby INDIANAPOLIS Pop. 107,445 Evansville Pop. 50,674 1702 Ft. Weyne Pop. 35,349 Wabash River 500 ms. long The French missionaries and Fur traders who first pushed their way into "New France," found the tribes of the great Miami Con- federacy in possession of what is now Indiana. Of the early trading posts which the French established, the only one to escape destruction by the savages, was Vincennes. It is consequently the oldest town in the State. From the cession to the English, and limited only by Indian wars, it has enjoyed prosperity under the successive relations it has eld to Virginia, as a part of the Northwestern Territory," as Indiana Territory, and finally as the nine- teenth State of the Union. Its populous city of Indianapolis, with public and private buildings of great magnificence, has long ago outgrown the four square miles of unbroken forest presented by the General Government to the State as the site of a capital. The city of Lafayette stands on the famous Tippecanoe battle ground. 1763 Wyandotte Cave Explored 20 mg. 1816 1820 Wheat Corn Oats Cattle Coal 1811 The full set of Forty-nine Maps of the States will be sent, post-paid, to any one on receipt of $1.00. To any subscriber of THE YOUTE'S COMPANION whose subscription 18 paid in advance, or who sends $1.75 for a year in advance, the Complete Set will be sent for half-price, 50 cents. THE YOUTH'S COMPANION, Boston, Mass