Lovers Leap On The Bosque River 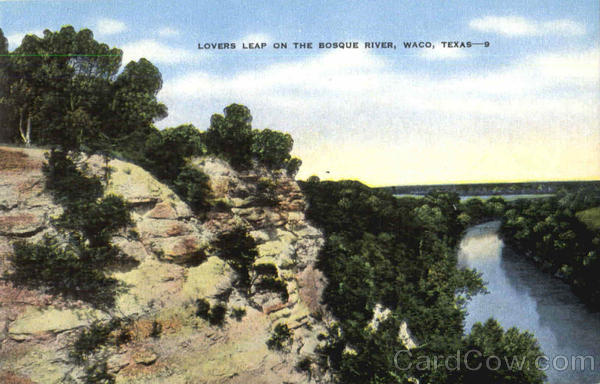 Back:
31398 Lovers Leap faces on the Bosque River near a point where it empties into the Brazos, and commands a view of the farm lands and plains to the east of the city. Abour it hangs the atmosphere of an old Indian legend of the lovers who made a desperate leap for safety from the top of the cliffs to the waters of the Bosque below them. They were driven to seek this dangerous mode of escape pursued, as they were, by the father and brothers of the maiden, who wanted to part the lovers since they belonged to warring tribes — she to the Huacos, he to the Apaches. Death halted their flight, so the story goes, in the turbulent waters of the river into which they flung themselves, but the cliff above them received a name. COLOR CO Published by B-W News Agency, Waco, Texas-