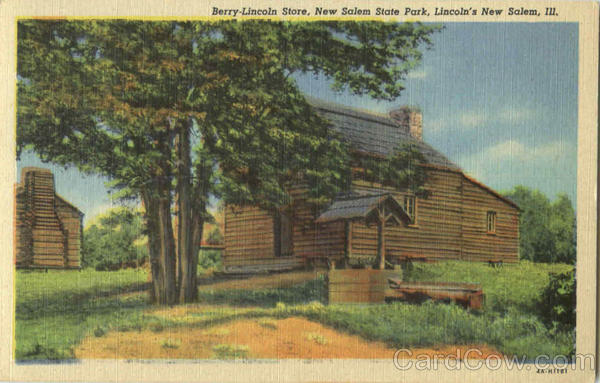 Back:
BERRY-LINCOLN STORE George Warburton, in 1830, erected on this site New Salem's only sheathed structure. Later the Chrisman Brothers and Reuben Radford also operated stores here. In January. 1833, Wm. F. Berry and Abraham Lincoln moved here from their first store, located just west of Ferguson's residence. Lincoln served a portion of his postmastership in this building. During the early summer of 1833 Lincoln sold his interest to Berry, who later sold the enterprise to the Trent Brothers. The Trents suddenly left the country and Berry resumed the business until he died in 1835. It is thought McNamar and Dr. Allen then took over the store and, in 1837, moved it to Petersburg. The large room was the store proper, while the rear lean-to served as a store room and, for a time, as Lincoln's bedroom. H. N. SHONKWILER, EXCLUSIVE DISTRIBUTOR, SPRINGFIELD. LE