Greetings From, Images of Town in Letters and Background 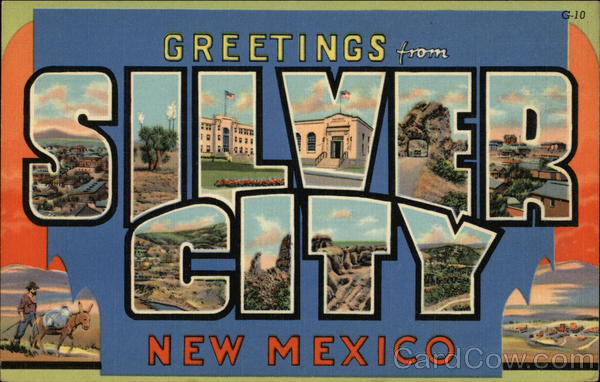 Back:
6 - Greetings from Silver City, New Mexico, a beautiful little city situated in the rich mining country of western New Mexico from which it derives its name. Many precious metals were discovered here in the early days and it was one of the most picturesque frontier towns of the times. Miners, Indians, outlaws, stage- coaches, ore laden burro trains-all lent color. Billy the Kid began his murderous career here, and Chief Geronimo had his rendezvous near- by. Mining is again a profitable industry. 7A-H1253 DISTRIBUTED BY J. R. WILLIS, BOX 665, ALBUQUERQUE, N. M.