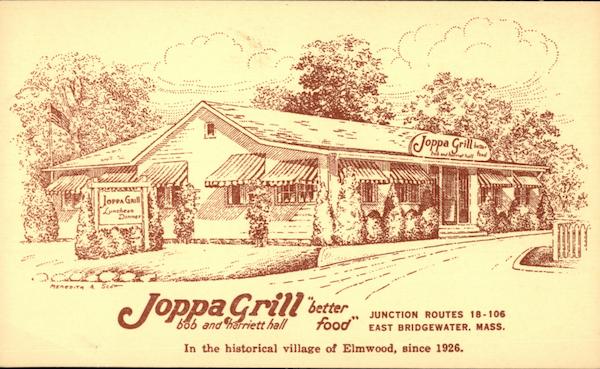 Back:
Member Mass. & National Restaurant Association Comfortably Air Conditioned JOPPA GRILL is located in the historical village of Elmwood, Mass., originally called J. ppa. The first house was built in 1662 by Thomas Whitman. In 1682 a tannery was started by Ensign Edward Mitchell who employ- ed a tanner by the name of Simon, and as the Bible speaks of "Simon, a tanner from Jorpa,” the name Joppa was given to the village. bob and harriett hall. “better food” FINE PASTRIES .. JOPPA BREAD STICKS (we do not serve wines or liquors) under the management of bob and harriett hall for the past thirty-two years. open 11:30 noun to 7:30 P. M. closed Mondays and Tuesdays (except holidays) Tel. E. B. DRake 8-2 11