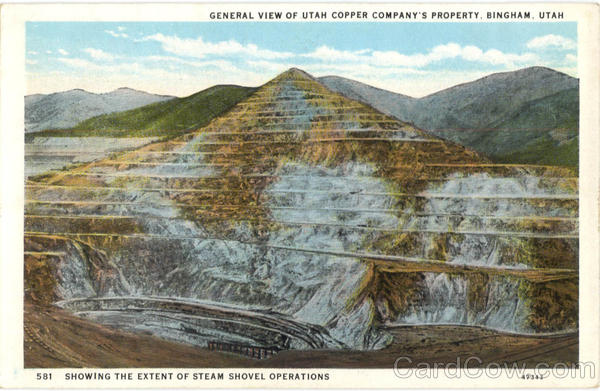 Back:
SALT LAKE CITY, UTAH on GENERAL VIEW OF UTAH COPPER CO'S PROPERTY, BINGHAM, UTAH The Utah Copper Company's Mine is located at Bingham, Utah, about 30 miles South West of Salt Lake City. This mine is operated by both underground workings and steam shovels. Daily output: Ore 22,000 tons, stripping, 31,000 tons. (Stripping is the overburden removed in order to get at the ore): employs 2,400; operates 41 miles of railroad the mountain, 51 locomotives, and 22 steam shovels. The height of the mountain above the pit is 1600 feet. At no place in the world is steam shoveling and moving of rock promoted on as extensive a scale at Bingham, where 22 steam shovels, 51 locomotives and 1000 ore cars are kept busy day and night. The total amount of material to be moved at the Utah Copper Mine, so far as present development indicates, is practically the same as the total amount moved on the Panamá Canal. as PUBLISHED BY DESERET BOOK COMPANY T. AMERICAN ART COLORES CAN