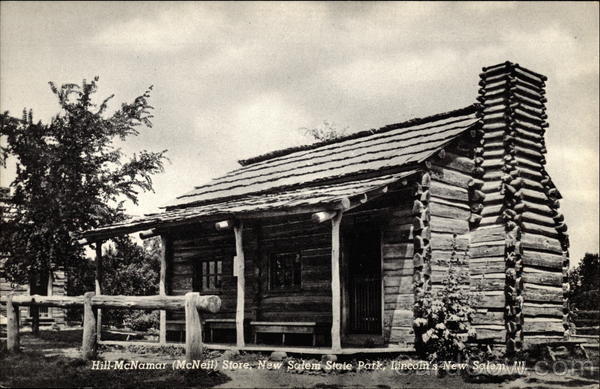 Back:
6 B1 6 3-N HII L-MCNAMAR STORE Samuel Hill erected New Salem's first store in 1829. He conducted the enterprise with John McNamar (who at that time assumed the name McNeil) until 1832 but from that time on he operated the store alone. In 1839 he moved to Petersburg. Hill was appointed Postmaster on Christmas Day, 1829, conse- quently this became New Salem's first post office. Later, Abraham Lincoln served the latter portion of his postmastership here, while clerking for Hill. This was the village's only store after the failures of Offut, Trent Brothers and Berry and Lincoln. Its stock was very complete and was one of Hill's several pros- perous enterprises. The structure was moved to Petersburg and re-erected there in 1839. Historic New Salem State Park is located near Petersburg on Highways 97 and 123 about 17 miles northwest of Springfield, Illinois. IRA E. OWEN, THE WAGON WHEEL INN, PETERSBURG, ILL.