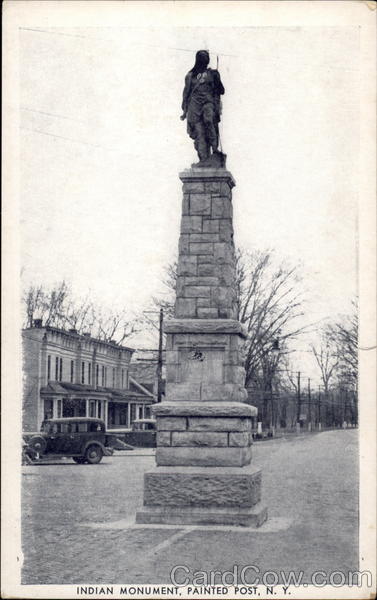 Back:
PH PAINTED POST was named from the fact that the first white people penetrating this wilderness, found a post standing about 8 feet high, whichwas claimed to be the resting place of Chief Montour, a son of Catherine Montour, who was wounded at the time of the ż battle of Fort Freeland. The post was painted in bright colors-no doubt the paint stones being used, as well as the juices of the wild berry. When this wooden post rotted, a tin Indian was put in its place, and later, 1894, a sub- stantial granite monument, which will commemorate for ages the rest- ing place of the great Seneca Indian Chief. Early indications showed that Painted Post was a council meeting place of the six nations. The land all through this locality yielded valuable relics—the finest collec- tion in this part of the state being that of the late FrancisErwin, grand- son of the founder of the town. Painted Post was first mentioned in history in 1791 in a letter from Gen. Knox to President Washington. MADE IN USA PUB. BY TILLMAN'S DRUG STORE, PAINTED Post, N. Y. CHO CO. Dew3 5.INC NYC