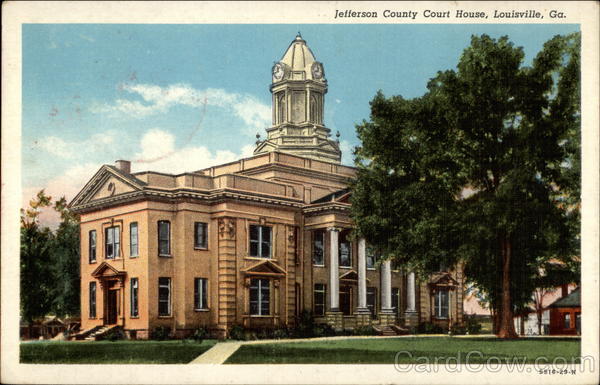 Back:
PN John Fietus ulot tay Hg, Co. Camp Indon JEFFERSON COUNTY COURT HOUSE Louisville, Georgia Built on the site of the First Capitol of Georgia, which was destroyed by Sherman's Army on their famous march to the sea in 1865; this building is modern in every respect. On the grounds is to be seen a granite marker erected by the Daughters of the Confederacy to commemorate the burning of the “Yazoo Fraud" papers early in the nineteenth century. All documents in connection with this gigantic steal were burned with "fire drawn from Heaven". QUISVICE RLACE JUN 1 10 PM LOUISVILLE DRUG CO., LOUISVILLE, GA. Hello Kids Hope Agr. Carl Devasto fuling much better Nation huspital Camp Gordon Mate it after all with See sal ruele dohnnie you are ya Nenny. See you sa