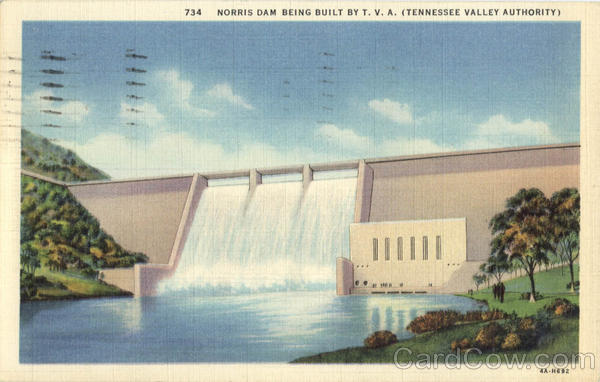 Back:
ENTIVAVUR che il POSTCARDS THE NORRIS DAM is being built and super- vised by the T. V.A. (Tennessee Valley Authority) Norris, of Nebraska. It is located Clinch River in Tennessee, just below when we were Cove Creek Dam. The Dam proper willi 36PM 5 3 thick at the base and 1800 feet long a1986 op. waters Norris Dan artificial lake of 3,600,000 acre-feet Enllane 80 square miles with a shore line of more than 800 miles. It is estimated that it will take three years to complete and the cost will be thirty-four million dollars. DENT Leane heshille soon 628 Lo . 57 St. for Orte ville . geht then late tonite. Hope Amoiled from Indians Monday and MRo Sild. Chamber the letter a Omaha Gelaka you got . JALD Wrie see this dan later