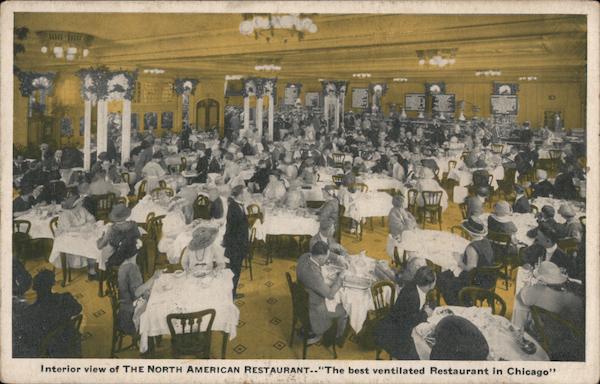 Back:
622 The most unusual dining-place in Chicago, or any other city, is the North American Restaurant Northwest corner State and Monroe Streets, CHICAGO Here you "serve" yourself and pay only for the food you eat. Consequently, although North American food has a reputation which is second to none it costs only about half what other good dining-places must charge to include "service” to your table. The North American Restaurant gives you more good food for less money than any other dining-place in the country. The truth of that statement is proved by the fact that nearly two million people dined here last year - the greatest volume ever achieved by any high-class restaurant or hotel. Most Distinctive Sea-food Restaurant Since Rector's (which was under the same ownership and management) Open from 7 A. M. until Midnight Sundays and Holidays too