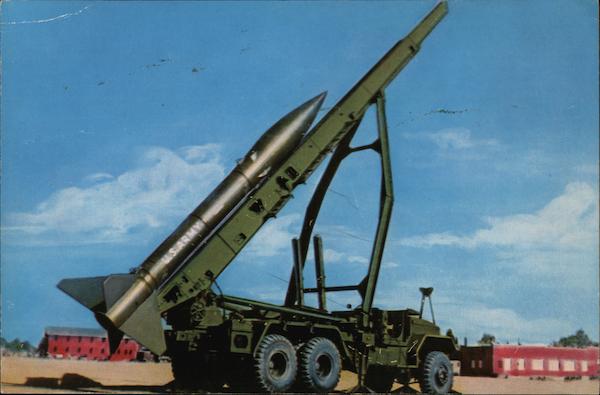 DEFENDERS OF AMERICA* THE "HONEST JOHN" ARTILLERY ROCKET The HONEST JOHN is a long range artillery rocket. Capable of carrying both atomic and high explosive warheads, it will be used tactically to provide close fire support in ground combat operations. Approaching the accuracy of standard artillery weapons, the HONEST JOHN is a free flight rocket as distinguished from guided missiles. It is simple to operate and has considerably more battlefield mobility than conventional artillery. One high explosive round can deliver on a target the demolition effect of hun- dreds of artillery shells. This is No. 18 of a series of twenty-four cards, each illustrating and describing a different weapon or piece of_equipment in the NABISCO Shredded Wheat "Defenders of America” series. Each of these cards is a full detailed reproduction of an official United States Army, Navy and Air Force or Marine photograph. One of these official photograph reproductions is packed in each package of Nabisco Shredded Wheat. Get the entire set by eating Nabisco Shredded Wheat regularly and trading with your friends. NATIONAL BISCUIT COMPANY NEW YORK 22, N.Y. *TRADE MARK U.S. ARMY PHOTOGRAPH