The Death Brand by Oren Arnold 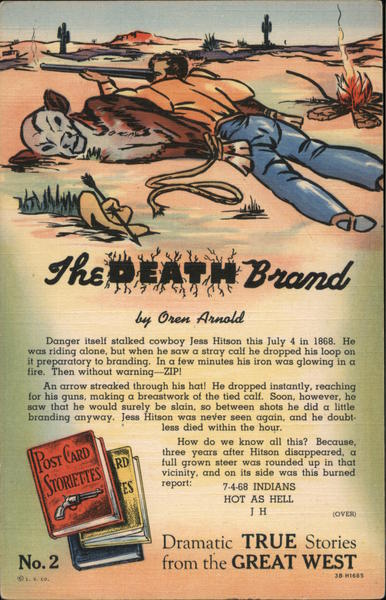 Front:
पद theDEATH Brand by Oren Arnold Danger itself stalked cowboy Jess Hitson this July 4 in 1868. He was riding alone, but when he saw a stray calf he dropped his loop on it preparatory to branding. In a few minutes his iron was glowing in a fire. Then without warning-ZIP! An arrow streaked through his hat! He dropped instantly, reaching for his guns, making a breastwork of the tied calf. Soon, however, he saw that he would surely be slain, so between shots he did a little branding anyway. Jess Hitson was never seen again, and he doubt- less died within the hour. RD STORIETTES ES How do we know all this? Because, three years after Hitson disappeared, a full grown steer was rounded up in that vicinity, and on its side was this burned report: 7-4-68 INDIANS HOT AS HELL J H (OVER) Dramatic TRUE Stories from the GREAT WEST No. 2 CL. S. CO. 3B H1685

Back:
THE DEATH BRAND (Concluded) It was cowboy nature to make his report to the boss in spite of savage Indians, and it was cowboy character also to comment on the weather. Adapted from the book HOT IRONS (Macmillan) by Oren Arnold and John P. Hale. COPYRIGHTED BY LOLLESGARD SPECIALTY CO.. TUCSON, ARIZONA