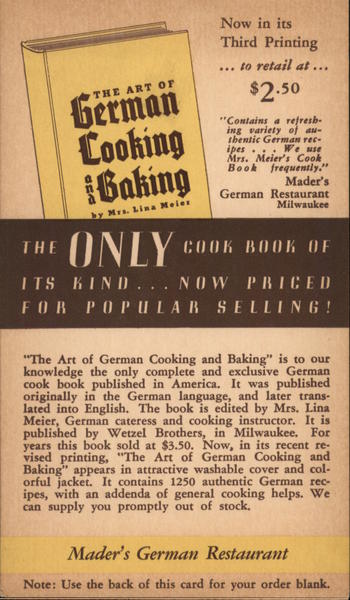 Front:
Now in its Third Printing to retail at ... ... $2.50 berman Cooking 16aking THE ART OF "Contains a refresh- ing variety of au- thentic German rec- . . . We use Mrs. Meier's Cook Book frequently." Mader's German Restaurant Milwaukee ipes by Mrs. Lina Meier СООК ВООК ОF ITS KIND.. . NOW PRICED FOR POPULAB SELLING! "The Art of German Cooking and Baking" is to our knowledge the only complete and exclusive German cook book published in America. It was published originally in the German language, and later trans- lated into English. The book is edited by Mrs. Lina Meier, German cateress and cooking instructor. It is published by Wetzel Brothers, in Milwaukee. For years this book sold at $3.50. Now, in its recent re- vised printing, "The Art of German Cooking and Baking" appears in attractive washable cover and col- orful jacket. It contains 1250 authentic German rec- ipes, with an addenda of general cooking helps. We can supply you promptly out of stock. Mader's German Restaurant Note: Use the back of this card for your order blank.