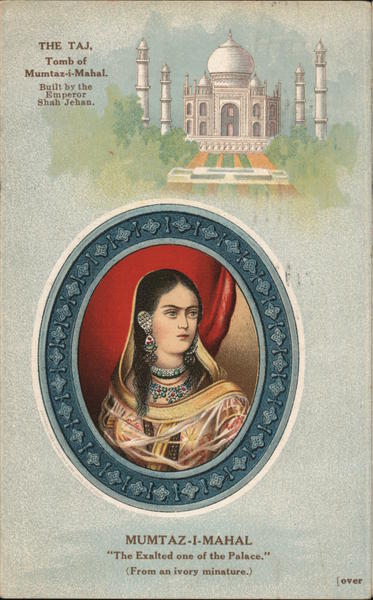 Front:
THE TAJ, Tomb of Mumtaz-i-Mahal. Built by the Emperor Shah Jehan. MUMTAZ-I-MAHAL "The Exalted one of the Palace." (From an ivory minature.) [over COMPTON& SONS LITHO CU. STLOUIS.

Back:
INDIA TEA GR Mumtaz-I-Mahal-"The Exalted Ope Palace”.- Empress of the Great Mogul Emp Shah Jehan. Married A. D. 1615, died 1629. hur last resting place is "the exquisite mausoleum The Taj Mahal, a dream in marble, de pe py Titans and finished by Jewellers.” 1911 The days of Oriental splendor are past and India is now a land of commercial activity. India Tea now links that ancient land of mys- tery and romance with this new world of the West, for India Tea, the best the world pro- duces, can now be had in the most remote towns and villages in the United States. India Tea is sold by:- W. Hoffman 6th Forest Aye Des Moines, Iowa,