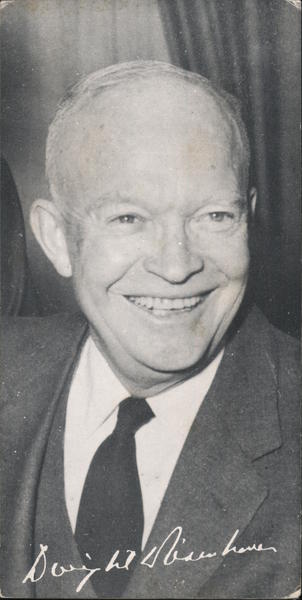 Back:
10 REASONS WHY WE SHOULD RE-ELECT PRESIDENT DWIGHT D. EISENHOWER 1. He ended the Korean war and has kept America out of war. 2. He has given the nation an effective foreign policy, backed up by a powerful defense force at less cost. 3. He achieved the conversion from war to peace' with the greatest prosperity the American people have ever known. 4. He replaced crook and crony government by restoring mor- ality, honesty, integrity and saneness to national government. He stopped the trend toward socialism by turning to the initiative and ability of the American people rather than government regimentation. 6. He made possible the biggest tax cut in American history by cutting government spending and waste. 7. He achieved fiscal integrity and a balanced budget. He has stabilized the cost of living, has halted inflation, and pre- served the value of the dollar. 8. He has increased welfare and security programs and is pro- moting the well being of Americans without regimentation and centralization. 9. He has been liberal in dealing with people and conservative in dealing with peoples' money. 10. He has been a President for all Americans regardless of po- litical affiliation, race, creed, color or economic background. WHY YOUR FINANCIAL HELP IS NEEDED Campaign costs get bigger and BIGGER as you can see from some of the typical campaign costs listed below. But that is not all. Your campaign dollar has a three- fold job to do. It is the responsibility of your State Republican Finance Committee to raise our fair share of the costs of IKE's campaign to finance the State's campaign, and the campaign in each Conn. community. DO YOU KNOW THAT .... A 30-minute nationwide TV program for IKE costs $227,905 A 30-minute nationwide Radio program for IKE costs $ 58,889 A full page ad for IKE in Connecticut's 16 dailies costs ......... $ 9,780 One 15-minute program on all Connecticut radio stations costs ....... ........... $ 989 One 15-minute broadcast on 5 TV stations costs .... $ 860 One minute radio announcements on Connecticut stations costs 316 ISSUED BY CONNECTICUT REPUBLICAN FINANCE COMMITTEE 410 ASYLUM STREET, HARTFORD, CONNECTICUT GIVE İKE AN EISENHOWER CONGRESS