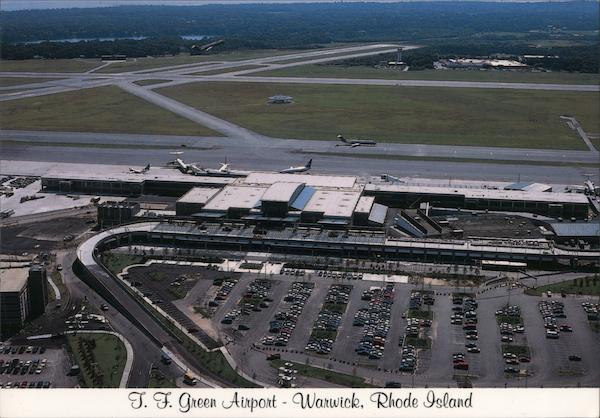 Back:
THEODORE FRANCIS GREEN AIRPORT Warwick, R.I. Opened on Sept. 27, 1931, as The Rhode Island State Airport at Hillsgrove, this was the first state owned airport in the country. Renamed the Theodore Francis Green Airport in 1936, the facility has had many improvements including runway extensions and improved access roads in 1967. Renovations to the terminal building were completed in 1982 at a cost of 4.5 million dollars. This aerial shows the entirely new terminal design with highway entrances on two levels. It was completed in 1996 at a cost of over $200 million, and should serve the flying public well into the future. © Published by John Hopf Educational Services 10 RED CROSS TERRACE, NEWPORT, R. I. 02840 U.S.A. Copyright John T. Hopf - 1005C SPACE RESERVED FOR U.S. POSTAL SERVICE