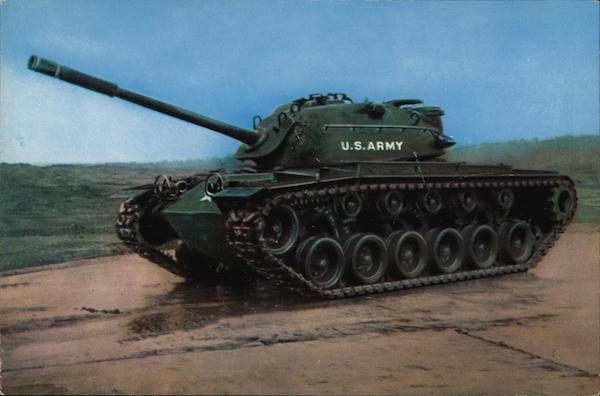 Back:
DEFENDERS OF AMERICA* THE PATTON M48 MEDIUM TANK The first completely new Tank to be developed since World War II. It was developed by the Army Ordnance and the Chrysler Corporation. It mounts a 90 mm high velocity gun, two .50 caliber machine guns and one .30 caliber machine gun. It is in the 45-50 ton class. The PATTON M-48 Medium Tank carries a crew of four—a tank commander, driver, gunner and loader. It also carries a precision range finder. This is No. 19 of a series of twenty-four cards, each illustrating and describing a different weapon or piece of equipment in the NABISCO Shredded Wheat "Defenders of America” series. Each of these cards is a full detailed reproduction of an official United States Army, Navy and Air Force or Marine photograph. One of these official photograph reproductions is packed in each package of Nabisco Shredded Wheat. Get the entire set by eating Nabisco Shredded Wheat regularly and trading with your friends. Tarlo Shreddeficial Dates Army,char of these in the Maillustrati NATIONAL BISCUIT COMPANY NEW YORK 22, N.Y. *TRADE MARK U.S. ARMY PHOTOGRAPH