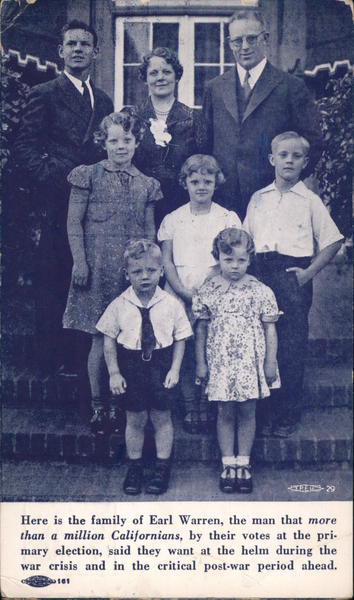 Front:
IPED 29 Here is the family of Earl Warren, the man that more than a million Californians, by their votes at the pri- mary election, said they want at the helm during the war crisis and in the critical post-war period ahead. p161

Back:
PUSTAGE ANO SWASHINGTON 1989 - 1999 Dear Friend: You who knew Fred realize how deeply he held the best interests of California. AKYAN I am sure he would ask Po@CT 23 to do the very thing I your IPM suggest — 1992 VOTE FOR EARL WARRENTE. AS GOVERNOR. In this critical time of war our State desperately needs vigorous, able, non-partisan leadership, of which Earl Warren is possessed. Let's forget politics and put California fully into the war effort. VOTE FOR EARL W ARREN Sincerely THEODORE RUSSI 2000 Almond Ave. Concord, Calif. Mro. Trud. E. Stewart 2200