Dear Friend...Won't you join me an vote for Judge Goodwin J. Knight for Lieutenant Governor? 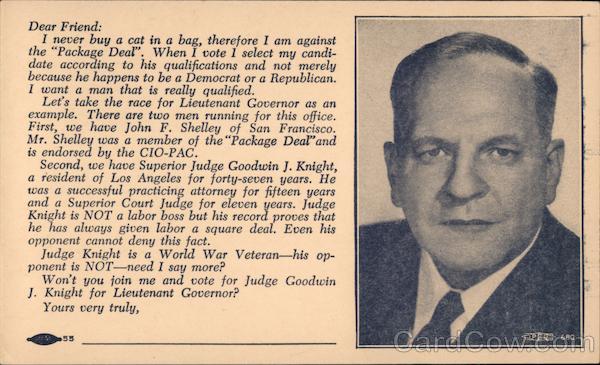 Front:
Dear Friend: I never buy a cat in a bag, therefore I am against the “Package Deal”. When I vote I select my candi- date according to his qualifications and not merely because he happens to be a Democrat or a Republican. I want a man that is really qualified. Let's take the race for Lieutenant Governor as an example. There are two men running for this office. First, we have John F. Shelley of San Francisco. Mr. Shelley was a member of the “Package Dealand is endorsed by the CIO-PAC. Second, we have Superior Judge Goodwin J. Knight, a resident of Los Angeles for forty-seven years. He was a successful practicing attorney for fifteen years and a Superior Court Judge for eleven years. Judge Knight is NOT a labor boss but his record proves that he has always given labor a square deal. Even his opponent cannot deny this fact. Judge Knight is a World War Veteran-his op- ponent is NOT—need I say more? Won't you join me and vote for Judge Goodwin J. Knight for Lieutenant Governor? Yours very truly, 55 PEUS 680

Back:
THIS SIDE OF CARD IS FOR ADDRESS EFFERS RSON